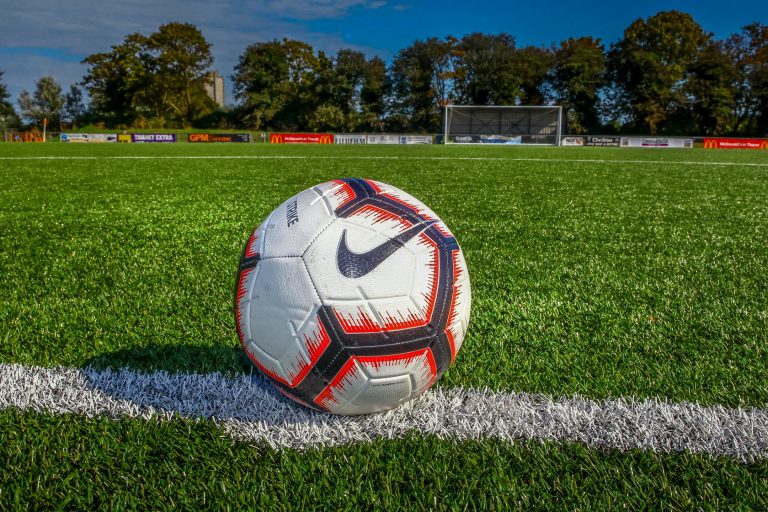 This was an excellent victory for Glebe against K Sports in the second round of the KitToFit Challenge Cup and although the final result looked comfortable for the home side they were pushed hard throughout by their opponents.

After an even start it was the home side that took the lead on six minutes through a stunning strike from midfielder Zak Emmings, who picking the ball up on the wide left some 30 yards from goal, he cut inside and then unleashed a powerful dipping shot that flew over the outstretched arm of the back pedalling K Sports keeper Nicky Tolhurst into the net.

A neat pass from Emmings then put Jack Porter in on goal but Tolhurst was quickly off his line to make a good block on the edge of his area.

A mistake in the home box then nearly gifted the visitors an equaliser when an attempted clearance was deflected straight to Jack Ward some 25 yards from goal. He controlled the ball well on his chest before hitting a first time volley that flew narrowly wide of the target. Glebe almost increased their lead on 19 minutes when Oscar Powell did well to win the ball on the edge of the visitors box and run through on goal, but spotting Tolhurst advancing off his line, he tried to chip on the on-rushing keeper but had insufficient height on his shot and Tolhurst was able to make a catch.

After this early excitement the game settled down into a bit of a midfield stalemate.

It was not until the 33rd minutes when there was another real chance of note and that was when K Sports’ Ward hit a swerving shot from wide left of the area that McDonald held moving to his left.

The visitors then pulled level on 39 minutes when Morgan Tasker turned well on the edge of the box and drilled home a low shot that beat McDonald to his left with the ball entering the net off the post.

K Sports then took the lead early in the second half when a Jake Bates corner from the right found the head of Sonny Cook rising highest in the box and although his powerful header beat McDonald high to his left, it rattled the bar sending the ball flying out to where Alex Selntigia was able to tap home from close range.

Glebe then went close to equalising on 56 minutes when McDonald’s long goal kick was headed into the path of Porter who raced through on goal but he hit his low shot too close to Tolhurst who was able to make a close range save.

However minutes later the hosts were level when Powell’s teasing cross from the right was bravely headed home at the far post from close range by a diving Jonas Whitmore low to the right of Tolhurst.

Just after the hour mark Glebe went ahead when Emmings played a free kick onto the run of Porter on the left side of the box and he took a touch before hitting a deft shot from an acute angle that flew across the face of goal, beating Tolhust to his left as the ball found the bottom far corner of the net.

Glebe’s Emmings then scored another spectacular goal as he picked the ball just outside the area and then drifted passed two defenders before calmly slotting the ball home low to the left of Tolhurst.

On 69 minutes the visitors went close to pulling a goal back when Bates whipped in a dipping free kick from wide left of the area that McDonald bravely diving forward managed to parry in the crowded box but the loose ball fell to Sam Newland whose hooked volley flew narrowly over the bar.

Glebe then promptly made it five on 72 minutes when Whitmore’s fierce free kick was parried by Tolhurst into the path of Porter who slotted home from close range.

Minutes later it was nearly six when Whitmore’s right wing cross was turned goalwards by Nathan Agyapong but Tolhurst managed to block his effort with his legs before the ball was cleared to safety.

Emmings then went close to completing his hat trick when he spotted Tolhurst off his line and tried an audacious shot from a 40 yard free kick that saw the ball sail narrowly wide as Tolhurst scrambled back to his goal.

The visitors then went close to reducing the arrears in the final minutes of the game. Selntigia had a low shot flash narrowly wide across the face of goal before on 86 minutes a Roberts free kick from wide left found Cook whose powerful header was well saved by McDonald diving high to his right, turning the ball over for a corner.

It was then the turn of Glebe’s Porter to go close to completing his hat trick when he had two chances late on in the game.

On 90 minutes he got onto the end of Whitmore’s right wing cross to hit a fierce volley that Tolhurst did well to save diving to his left before deep in stoppage time he did well to win the ball in midfield and then race through on goal but his rasping drive was well saved by Tolhurst diving high to his right for a corner.