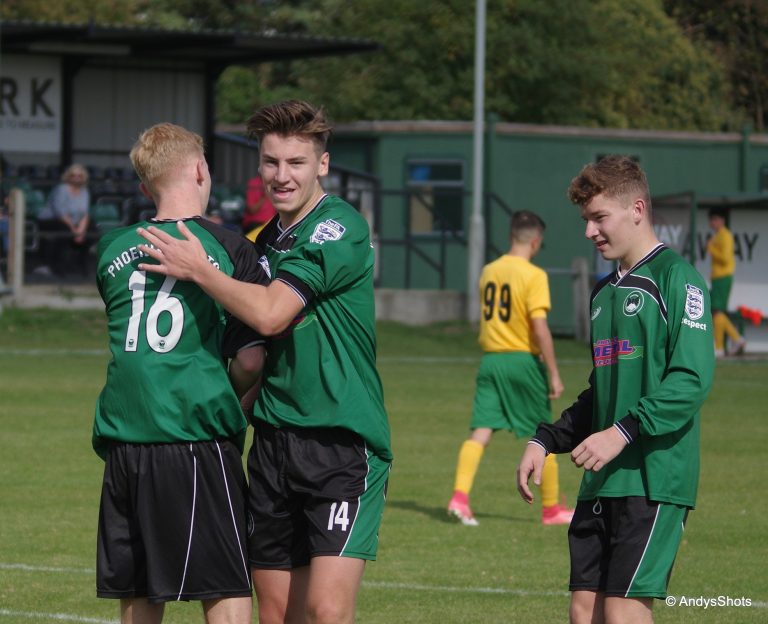 Holmesdale picked up their first league win of the season with an impressive victory against visitors Sporting Club Thamesmead.

They started the game brightly and took the lead after 4 minutes through a superb solo goal from Nathan Lewer-Smith.

Picking the ball up just in the SCT half he raced forward into the box, evading a number of tackles before slotting home low to the right of SCT keeper Nathaniel Ratcliffe.

Holmesdale’s Isacc John was next to make a powerful forward run but his long range shot flew straight at Ratcliffe.

After these early chances the game settled down until the 22 minute when the hosts scored their second goal of the game. William Keene’s corner from the right was met by a towering header from Lewer-Smith that saw the ball rocket home high to the left of the unmoving Ratcliffe into the top corner of the net.

Lewer-Smith might have completed his hat trick minutes later when running onto Omar Belazregue’s clever ball over the visitors back line but with only Ratcliffe to beat he shot straight at the SCT keeper.

Just after the hour Mark Ratcliffe was called into action again making a good save low at his near post to turn out John’s fierce drive after he had made another powerful surging run into the box.

From the corner taken by Keene, Lewer-Smith again got free of his marker but this time his downward header bounced narrowly wide of the left hand post.

The visitors had found it difficult to make inroads against the Holmesdale defence well marshalled by Reece Stevens-King.

However on 40 minutes they went close to reducing the arrears when Jayden Amoako’s curling in-swinging cross from the left saw the ball bounce dangerously across the face of goal, narrowly being missed by the on-rushing Pernel Wood, before hitting Daniel Mamas’s left hand post and flying out to safety.

On 43 minutes Ratcliffe made another good diving save low to his left to keep out Keno Myrie’s shot on the turn but in stoppage time at the end of the first half Holmesdale made it three from the penalty spot.

John, running onto Belazregue’s through ball, was brought down in the area by Elisha Lawson and he took the spot kick firing home low to the right of Ratcliffe who dived left.

Holmesdale continued to dominate proceedings in the second half and on 53 minutes went close to increasing their lead when Lewer-Smith’s cross field pass found Keene on the edge of the box but his deflected shot was well saved by Ratcliffe diving to his left.

Minutes later Stevens-King made a good interception on the half way line before playing the ball up to Lewer-Smith and continued his run, Lewer-Smith then deftly slipped the ball through into the box for Stevens-King but his shot was defected out for a corner.

Just after the hour mark it might have been four when Keene made a good run down the right before whipping over a low cross that Lewer-Smith turned narrowly wide.

The visitors then pulled a goal back on 67 minutes from the penalty spot after Marley Markham was adjudged to have handled Stephen Oswu’s right wing cross after the ball had hit his arm from close range. The penalty awarded after the referee had consulted the linesman.

Shortly afterwards SCT nearly scored again after Vosper’s right wing cross found Wood whose close range header was blocked by a defender, the loose ball falling to Amoako who had his close range shot well blocked by Mamas before Samuel Coulibaly had his follow up shot deflected out for a corner.

However having survived this melee in their box the hosts made sure of the points scoring twice in the final minutes of the game.